Episode 42: A tangle of knitters?

Welcome to episode 42 everybody! Kim and Marcy are in the classroom and they are sharing all of their FO's, WIP's and new CO's. There's uber craftiness and plans for the end of 2017 (can you believe that?!?) Grab your knitting, a soothing beverage and join us!


What's in our Lesson Plan?

On the PA System

Marcy brought us a fun question- what is a group of knitters called? There is no actual term for it, but on the blog, 'Men Who Knit, ' they were curious about the collective noun for knitters and they took a poll in 2007. Go have a look and let us know what you think.  Here are some options: tangle, herd, purl, obsession, ...

Marcy gave Kim her xmas present because she was dying for her to see this beautiful fiber that she got at Paradise Fiber in Spokane.  Marcy got a wonderful interview with the owner of the shop and we will be dropping it after the New Year.

After the Finish Line

Marcy was wearing her Casual Kimono while we recorded and she's been getting a lot of wear out of it recently. She's also been wearing her True coat by Joji Locatelli and Pippa has been wearing her adorable cashmere baby bonnet given to her by Bonnie Riley at Lamb Town.

Kim has been wearing her Veronika by Cocoknits so much that she's thinking about making a 2nd. She often pairs it with her Drachenfels shawl by Melanie Berg. She's been wearing her 1st sweaterspin, the Art Walk Cardi by Hannah Fettig a lot and has worn her Bankhead hat by Susie Gourlay while walking late in the day. She wears hand knit socks everyday.

Kim is in sleeve hell and still hasn't finished her Sunset Highway by Caitlin Hunter because of the darn sleeves. So many howlers!!! (Created by her...not the pattern, sigh.) She is also working on  and really enjoying her new CO, the Zweig pullover also by Caitlin Hunter. This is a beautiful pullover with a little bit of color work on the yoke and some gorgeous lace with a few cables as the main feature on the yoke.  Kim is continuing to work on her P-Rex by SoSu, in between knitting Caitlin Hunter sweaters! It will be such a fun cape to wear and the colors are beautiful.

***Kim's new knitting guideline is to READ the pattern, probably a few times, and then knit (hopefully just once!) in order to avoid more howlers due to silly mistakes and not paying attention to the instructions!

Kim's Damejakka Loppa by Pinnegurri is living up in her knitting studio and is coming along slowly because it's not getting a lot of time and attention at the moment.  Finally, her Afterthought Everything Christmas socks are moving along. Hopefully, they'll be done by Christmas.

Marcy is working on her P-Rex cape and it's coming along beautifully. She's making a few mods, which will all be listed on her project page. She has resurrected a project that really needs to be called a UFO instead of a WIP (unfinished object instead of work in progress,) which we all have. Her #12 Collared Cardigan by Sharon Sorken was CO on 1/22/14, but it's in her active rotation now! She's concerned about the sizing, but hopes that with blocking the sweater will grow and fit nicely.

Marcy is continuing to work on Pippa's Christmas stocking and she's making wonderful progress. It's looking beautiful and baby Pippa will certainly have a stocking to put out for Santa on 12/24! In our last episode, Marcy spoke about 'Project Peace 2017.' She has cast on the shawl and is really enjoying the daily emails, the easy knit and the yarn. You can read all about this project on Christina Campbell's (aka, The Healthy Knitter,) blog. Kim has purchased the pattern (only $3 and all proceeds go to charity,) and is planning on casting on at the end of the year or in January. Join us in this fun and peaceful project!

We are Uber Crafty

Kim has finished ~ 600 yards of a 3 ply on her 3rd sweater spin. This one is made up mainly of natural BFL and then she added in 1 braid that has red, blue and greens in it. The two finished bobbins look like Gingerbread Christmas! The plan is now to finish spinning the rest of the fiber and then next Fall to knit a Christmas sweater.


Kim hosted some knitting friends for a "Craft all the Christmas things day." They had a ball and made fairly fast and easy Christmas ornaments and gifts that can all be found on Pinterest. Here is Kim's Pinterest page. They made: felted soap, yarn hat ornaments, Christmas star ornaments and several different types of yarn balls.

Episode 43 will be our last one for 2017! We will revisit our year long knitting goals and talk about how we did. We'll also be sharing any new cast ons, WIP's and FO's. Hopefully there will be a stocking or two finished and 1 or 2 sweaters! Have a fantastic couple of peaceful weeks and Happy Knitting!

Posted by Kimberley at 9:49 AM 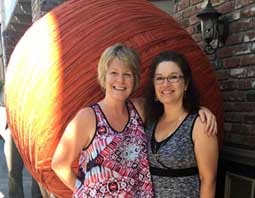